If you would like to purchase reprints of your child’s Santa photo, you MUST have the code from the corner of the photo to see their photo.

I have recently gotten back into making buttons and magnets.  I have opened a seperate storefront, but I just wanted to put something here as well for those who may stumble on here inadvertently.

Click here to go to the button and magnet store

I created this website to share my love of photography with others, and to take you on the journeys to places that are unique.

END_OF_DOCUMENT_TOKEN_TO_BE_REPLACED

A lot of beginners ask “How do I create my watermark”  Here’s how.

END_OF_DOCUMENT_TOKEN_TO_BE_REPLACED

On April 13th I went to Glen Helen Nature Preserve with one of the many photo groups I belong to.  The goal, wildflowers.

As always when hiking or really just leaving the roadway I took the handheld GPS with me.  This serves several purposes:  Help me find the vehicle if I were to get lost or come back a different trail, and it helps me to know exactly (well close enough) as to where I took the photo. 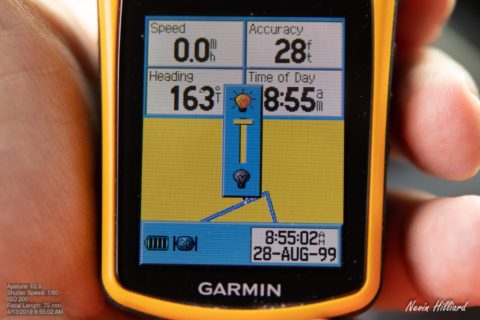 Notice below I brought up the screen on the GPS showing the exact time.  This will help if so if the camera’s clock is off I have a photo of the time that it should read (so I can shift the capture time).

Now remember I said this was APRIL 13, 2019….   Notice what date it says…. yeah neither did I until I got home. This was a software issue with this model of Garmin GPS, it required an update and me to manually change the date in the tracklogs so I could use the data. END_OF_DOCUMENT_TOKEN_TO_BE_REPLACED

I have decided to showcase and sell some of my landscape photography work.

These are photos shot all over the United States and a few in other countries.

Prices will vary by size and mounting options  All prints are produced in a renowned professional photo lab.

Click the photo below to view my other landscape photos.

If you want to know more about how I print and deliver my prints…. END_OF_DOCUMENT_TOKEN_TO_BE_REPLACED

This can be a touchy and heated subject.  With the advent of digital photography and the ease of duplicating a photo.  Clients and other photographers and printers can easily run into copyright infringement. END_OF_DOCUMENT_TOKEN_TO_BE_REPLACED

I see it all the time, photographers posting pictures of their clients on and around train tracks.

1) It is illegal – Photographing on active tracks is always illegal and photographing dormant tracks is almost always illegal.  The tracks and the area surrounding them are private property, so when you shoot on the tracks you are breaking the law (criminal trespassing). Even if you don’t see trains on the tracks, and there’s vegetation growing up in the railbed, it is still private property and those tracks can be active at any time.

If the tracks are dormant and non-functional they will be clearly marked, and even then your presence on them is still trespassing. END_OF_DOCUMENT_TOKEN_TO_BE_REPLACED

I wear MANY hats. In addition to doing photography, I still run my dj business. This blog post comes from experiences with the DJ biz, but can apply to photography as well.

What do you do when a client abuses you or your equipment?

END_OF_DOCUMENT_TOKEN_TO_BE_REPLACED

So as you may or may not know.  I volunteer to cover media for a local Christian radio station.   I just finished shooting their largest concert, a 3 day event.    If you’ve attended a concert that they sponsored, you’ve see me.  I’ll be the guy loaded down like a pack mule with over 20# of camera gear, probably blocking your view (sorry, I need my shots).

This year it was HOT!!!!  I sweated so much that my ballcap was soaked in every inch and I never got in the lake or got wet.  I got sunburned good, not as bad as I have in years past… but with all the sweat I cannot put anything on my face as it would just run into my eyes anyway. END_OF_DOCUMENT_TOKEN_TO_BE_REPLACED